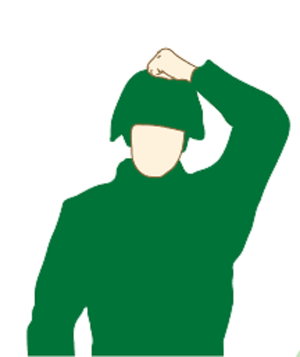 Fist on head to indicate that the player is not diegetically present.

Several hand gestures or signals have been in use in the nordic larp scene (and elsewhere, perhaps universally) since at least the 1990s, and spread organically over time. A common one being forming a "T" (for timeout) with the hands or raising a fist above the head. The "timeout" sign is most often used by players engaged in diegetic conversation when they either need to ask a non-diegetic question or convey important non-diegetic information to the other player somewhat discreetly. The fist over the head is commonly used to indicate that the player is to be ignored, ie is not present diegetically (for instance if a "dead" character needs to move somewhere encountering other players on the way).

Variants of the Off-game runes common in Sweden and Norway.

A symbol very common in Sweden (and also in Norway, with a slight variation) is the "off-game rune" (also known as Utgårdsrunan, "Outyards rune") which indicates that an object (such as a chest or door) is not "in-game", and should be ignored. Commonly used to mark a pouch or similar carried during the larp in which the player stores non-diegetic items they need during the larp (such as medicine, a phone or other items). The creation of the Off-game rune is attributed to Gabriel Sandberg[1] in the 1990s.

In some nordic larps, especially geared towards international players, the symbol has simply been replace with the text "OFF GAME".

Sometimes during the course of the larp a player might need to ask another player something out of game discreetly and then quickly return to playing by using a code word - often in conjunction with a hand signal such as timeout. This has for instance been used to convey some diegetic effect that is not obvious ("You have been poisoned"), to ask for knowledge that the character would know but the player might not or any other non-diegetic information that cannot be easily conveyed diegetically (eg "I'm an organizer and I need to get out of this scene because I have important things to do" or "You might recognize me as a character I played previously but I've actually switched characters").

Before there were established check-in/calibration techniques code words like these were also used for that purpose, for instance to check if a player was comfortable with a certain action or wanted to deescalate or escalate.