Difference between revisions of "Mare Incognitum"

Template:Larp Mare Incognitum was a lovecraftian mythos horror larp set in Norway in 1951, and played onboard the destroyer HMS Småland. The larp had 26 pre-written characters from different groups. Three games were run over the course of a weekend, and had participants from Sweden, Finland, Norway, Denmark, Estonia, Spain, the US and the UK. The game was organized by Berättelsefrämjandet, and had some ten NPCs and crew.

The different groups of players had all boarded the freighter M/S Lyckan to sail to Narvik, in order to get home after spending time in Kirkenes. An anthropological expedition to Kirkenes had brought along a strange statuette found in a burial mound, which slowly corrupted the crew onboard. As the ship got stuck in the ice and a severe storm blew in, the passengers found themselves trapped aboard a dark ship as horror crept out of the shadows. 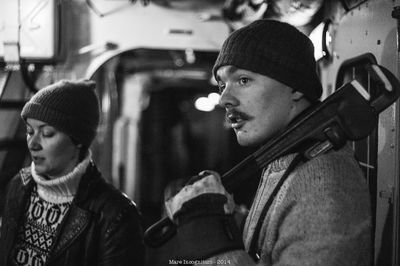