Difference between revisions of "Inside:outside"

Template:Game inside:outside was a highly abstract four-hour game that was staged ten times for fifteen players. The game was played in Sweden, Norway, and Finland, in art galleries, role-playing conventions, political youth camps, and more informally for local larpers. It was designed and written by Eirik Fatland and Mike Pohjola and produced by Irene Tanke.

A bunch of strangers wake up in a white cube, not knowing how or why. They are all prisoners, wearing white, numbered overalls. A female voice calls them by their numbers one at a time to enter the next room. In the other room a male voice accuses them of unspecified crimes, holds philosophical monologues, and forces them to confront ethical dilemmas. Then the prisoner is returned with the others. At random times, or if the prisoners are difficult, guards enter the cell and beat up the prisoners.

The player experience was designed to contain a ritualistic entrance into the game, and an exit from it. At the start of the event, the players would receive outlines for their characters, and fill them out by answering a list of questions. “Where are you from? How do you deal with people whose views differ from your own?” After that there were drama exercises to establish the characters daily routine and physical mannerisms. Then the players would close their eyes and be escorted one by one into a dark room. As a voice counts from one to ten, you become the character.

The larp begins with the characters sleeping. As the lights go up they wake up in a white room surrounded by strangers in white uniforms. The last thing they remember is going to sleep in their bed after a normal, uneventful day. How long have they been here? No-one admits to knowing anything. There are surveillance cameras in some of the corners and people yell for help, but nothing happens.

After a while a female voice comes from the loudspeakers. “Prisoner 0036, please enter the courtroom.” One of the prisoners goes in the other room, a similar white cube, but with a mirror hanging from the ceiling. There is a guard standing in the corner, face is covered with a black hood and sunglasses. He never speaks.

A male voice identifies itself as the Judge, and explains the prisoner needs ten points to get out. The prisoner is taken back to the cell, and another is asked into the courtroom. One by one all the prisoners go in and come back. At first they’re told to give points to each other. “Give two points to one of your cellmates.” “Choose five points for yourself and none for the others, or one point for everybody else but none for you.” The questions get harder and harder, and there is no right answer.

Everyone is sweating in their uniforms. People fight with each other, sometimes the Judge tells them what the others have chosen. Some lie to other prisoners about their choices. Many try to guess who built this cell and who the Judge is. The police? The government? A Japanese TV show? A psychological laboratory? Some hope of release if they manage well in this cruel game, but it is also apparent that not everyone will survive the prison.

After several hours the first player is called back in. The guard is still there, in the same spot, staring. The Judge speaks. “You have eight points. You need ten points to go free. You are given one final dilemma. You will get two points and will be set free, if you choose one of your cellmates to be killed.”

The prisoners in the cell hear the dilemma, but don’t hear the reply. People are anxious: could she betray them? Who will she choose? After all the prisoners have visited the judge at least once the game can end in several ways, One possibility is that one prisoner dies, and is removed from the cell. Another is that one of the prisoners is set free. The prisoners might also refuse to cooperate, rebel and take down the guards.

Alternatively one group of prisoners could ally themselves with the system, and killing the rest. inside:outside was staged ten times, and these are all actual endings from different runs. If no other ending was in sight, the game masters playing the Judge would end the game with all the characters having to face a dilemma together, choosing one prisoner to die and another to go free.

For some reason I felt that what happened was completely random and that no prisoners would do anything to influence the situation, while organizers claimed that all they did was the reaction of the players' choice. I do not know why I did not see the game as interactive. (Player, 7th run) After that the lights go off. A voice counts from ten to one, and the players slowly become themselves again. They are taken out of the cell, and the debrief begins. 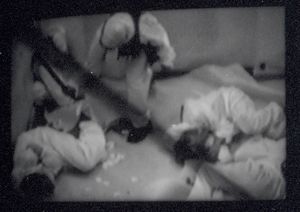 inside:outside was influenced by writings of Franz Kafka, Samuel Beckett, George Orwell and Jean-Paul Sartre, as well as films A Clockwork Orange (1971) and The Cube (1997). At the core of the dramaturgy of inside:outside were two dilemmas of game theory:

The Prisoner’s Dilemma: Two people are arrested, but there is not enough evidence against them. They are separated, and the officials offer both a deal. If one testifies against the other, the betrayer goes free and the other gets a ten year sentence. If neither testifies, both are only sentenced to six months. If they both betray each other, they both get five years. What would you do?

A big part of the larp were the very stylized aesthetics, including the white cube, the white overalls and an oppressive ambient soundscape. The characters were skimmed down to the bare minimum. The Cube was a strong influence on the visuals, while A Clockwork Orange affected the tone of the Judge and the monologues.

"I liked the simplicity of the environment and the design. The costumes were excellent. I was bothered by the walls being soft." (Player, 10th run)

"In this game you don’t play a character but a situation. The moment and momentary emotions make the character irrelevant for the experience of immersion, since it doesn’t really matter who you are because most western people would react in a similar fashion." (Player, 9th run)

"Could the players play themselves? At first I thought that the roles were not important, and therefore could have been removed. Now I have changed my mind. The game was so good partly because it had such a clear focus on ethics and morality. Playing oneself in the midst of all this would have introduced so many new elements that this focus would have been lost. The roles were thus not important in itself, but served as a way to create distance and concentration on the game." (Player, 7th run)

"What inside:outside shows is that these all-important basic questions can be proposed in the shape of a game and that the participants are forced to actually dig the bottom of their psyche to find the answers." (Player, 4th run)

"For some reason I felt that what happened was completely random and that no prisoners would do anything to influence the situation, while organizers claimed that all they did was the reaction of the players' choice. I do not know why I did not see the game as interactive." (Player, 7th run)

"The game was good fun, but it would have had to be considerably longer in order to get full points from me. Now it felt a bit hurried, probably due to the fact that our characters managed to mess up the organisers’ schedule with their resistance." (Player, 10th run, four hours)

"In advance, I was skeptical of this style of play, but inside:outside has made me change the attitude. Because the game was so short and because so many external factors provided the intensity was it okay to relax and just see what happened through the role." (Player, 7th run, eight hours)

"inside:outside was also produced to Ropecon, and has the singular honor of being something of a death blow to the debate whether roleplaying games may be art. The most popular, and practical, definition of art that also has academic credibility is that everything presented in an art context is art. This means that Duchamp's Fountain is transformed into art when it's moved from the men's lavatory to the art museum. This also means that inside:outside, originally commissioned by Kunstnernes Hus, the museum of modern art in Oslo, is art. Since it's also a larp, by extension any larp may be art. Or rather, at the bare minimum, any larp presented as art is art." - Juhana Pettersson in his column on RPGnet