Difference between revisions of "College of Wizardry" 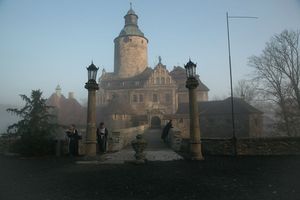 College of Wizardy was a larp set in an world inspired by about Harry Potter by J.K. Rowling, It took place in the caste of Czocha in Poland in November 2014. The larp centers around the College of Witchcraft and Wizardry a school for wizards and witches alike, taking classes as well as fighting evil and engaging in teen-drama.

The rights holders for Harry Potter suggested that the organisers might wish to move away from using their IP, and so after the third CoW event a new story world was created that did not include any of the trappings of the Harry Potter universe.