Katri as the defeated evil queen of Albión in 2008.

Katri Lassila is a Finnish photography and film artist working in Aalto University as a doctoral candidate. Lassila has been designing and organising larps since 1998. In 2011 she designed larp for the Finnish Science Centre Heureka (with Emilia Karppinen and Mikko Meriläinen) and in 2012 for the contemporary art festival Ihme-päivät (with Juhana Pettersson and Antti Kanner). She's the co-creator of the adventurous romanticist (also called adventure romantic) playing style together with Laura Kalli, and has introduced such concepts as the rule of the greater drama, and fisherman's wife character. Lassila has emphasized the importance of larp documentation and documented her games extensively in video and still photography from the early 2000's onwards. 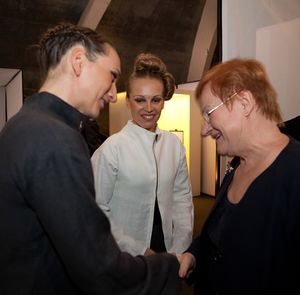 Katri in her character welcoming the president of Finland Tarja Halonen to the City of the Future. Photo: Vesa Lepistö / Heureka